Ayatollah Shaykh Ayad al-Rikabi, has denounced the proposed conversion of the ancient tomb of the Prophet Ezekiel into an Islamic site

One of Iraq’s leading clerics, Ayatollah Shaykh Ayad al-Rikabi, has denounced the proposed conversion of the ancient tomb of the Prophet Ezekiel into an Islamic site.

Iraq’s Department of Antiquities and the Iraqi Shi’i “waqf”, which controls religious heritage sites in the country, has stated that the historic tomb does not belong to Iraq’s dwindling Jewish community.

It asserted that since Ezekiel is described in the Koran as a Muslim, the tomb should be declared an Islamic site. Plans are now under way to turn the site into a mosque.

Ayatollah al-Rikabi, whose own tribe came from the area close to the tomb, has written to the Grand Ayatollah Ali al-Sistani, Iraq’s foremost religious Shi’a leader, to request that the plans be overturned and that the tomb be kept as a Jewish holy site.

He wrote: “It is my view that this is imperative that you stand against this deviation, and work in order to repair the damage and confront anyone that has ill intents towards Iraq and its people. “

He added: “I am confident that you will not keep silent in the face of unjust treatment and oppression.

Professor Shmuel Moreh of the Hebrew University, who was born in Baghdad, has been campaigning against the plan, calling the tomb “the holiest site for the Jews of Babylon”.

In January this year, Israeli media reported that Iraqi renovation workers had damaged an ancient Hebrew inscription on the tomb, something which Professor Moreh claimed was not accidental. The Iraqi government now reportedly plans to erase all the Hebrew inscriptions from the tomb.

The tomb is located south of Baghdad in a town called al-Kifl, and is regularly visited by Jews, Christians, and Muslims.

In 2004, it was estimated that less than 100 practising Jews still live in Iraq. 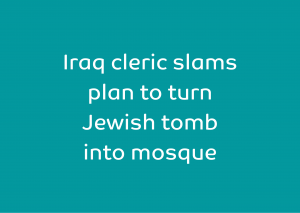